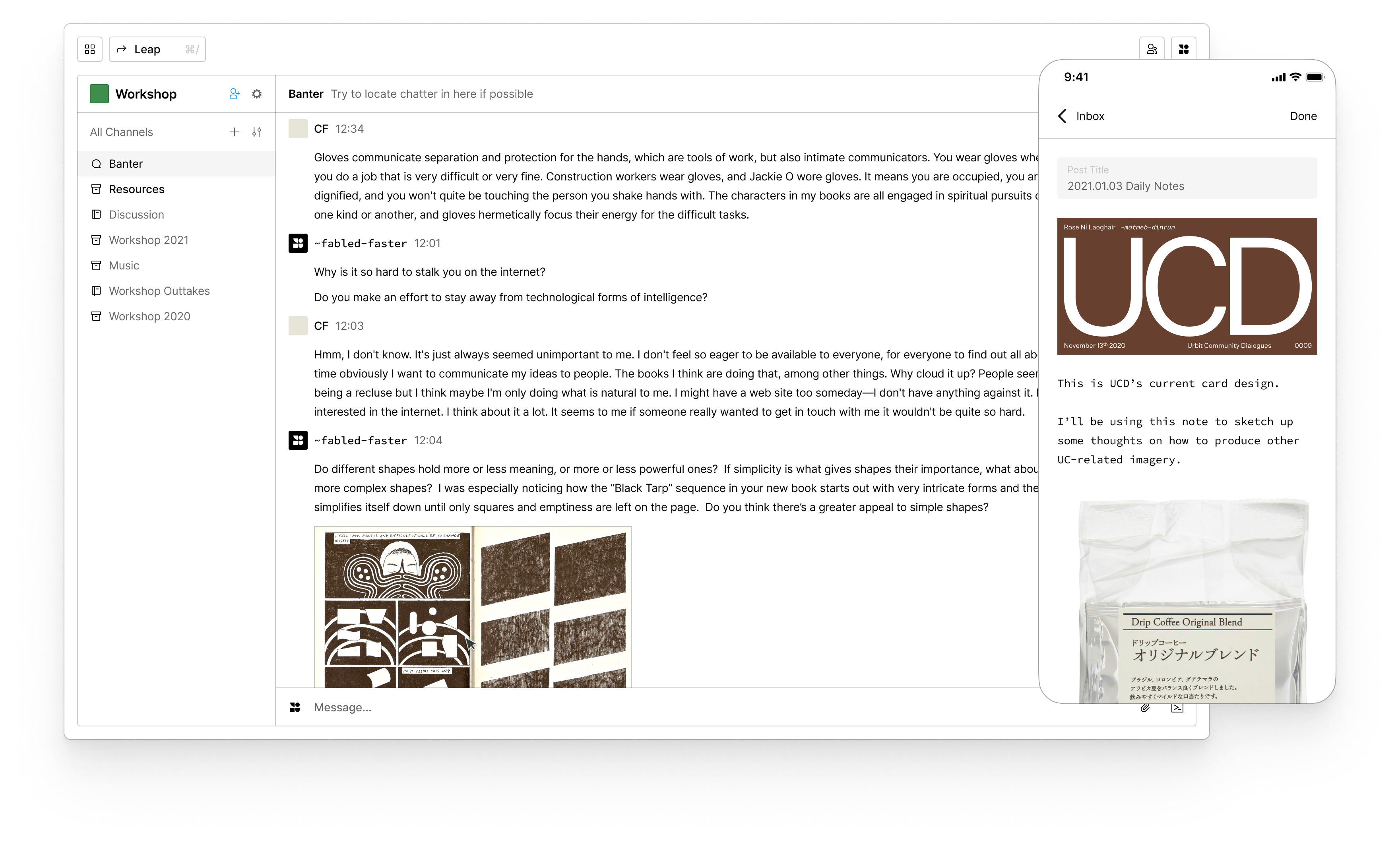 The architecture of Landscape’s userspace application suite has gone through a number of overhauls in the past few years, and each iteration has gotten closer to a point where Urbit’s userspace can truly perform as a next-generation social suite built entirely on distributed networking and individual-owned personal servers.

As of this year, this application suite has arrived at a point where we’re confident both in how all the parts fit together, and confident in the individual parts.

What is Landscape Intended to Be?

Landscape is specifically a social suite of applications, meant to enable communication and socializing in many forms.

What is Landscape technically composed of?

Landscape is composed of two primary parts: its backend, which runs as a suite of userspace applications (also known as Gall agents), and its frontend interface, which runs as a single-page web application. Both the backend and the frontend may be decomposed into their constituent parts for further understanding.

The Landscape backend is implemented as a collection of long-running microservices known as Gall agents. They can be divided into the following, though this is a simplification:

Each of these components are built out using a few microservices that handle more specific responsibilities. These responsibilities can be subdivided into two main categories: stores and hooks. To simply describe the separation of responsibilities, stores are dumb databases (models in MVC) and hooks are for processing data (controllers in MVC).

Concisely defined, a store is a dumb database. It does not send outgoing pokes, watches, or peeks, except in an +on-load to migrate its state. It does store permanent and/or temporary state, allows incoming peeks/watches to read that data, and allows pokes to modify that data. A store may only accept local reads and writes, not remote ones. It may or may not interact with various kernel modules. Examples include: graph-store, group-store, metadata-store, contact-store, and invite-store.

A hook is a more loosely-defined agent that performs business logic. It should only keep track of a minimal amount of state (e.g. active subscriptions). Hooks are used for a variety of purposes in the system, but there are a few important hook patterns to be aware of:

A pull-hook syncs data from a remote resource down to a local resource. There is a pull-hook library that drastically simplifies the implementation of such a hook, and is the defacto standard for how to sync down remote data to your ship.

A push-hook allows remote ships to subscribe to and sync down the information from a local resource. There is a push-hook library that drastically simplifies the implementation of such a hook, and is the defacto standard for how to make local data available to remote ships.

The observe-hook subscribes to data coming in from another agent, and starts up a thread of computation every time a subscription update from that agent is received.

The poke-proxy-hook conditionally forwards a poke from a foreign ship to a store on the local ship if the foreign ship has permission to do so.

Groups are the core building block of data permissioning within Landscape. A group is made up of the following fields:

The %group-store holds a map of these groups and allows subscriptions to their data. The group-store may be accessed from foreign ships through the use of the %group-pull-hook and %group-push-hook. Groups may be joined either by manually discovering and pasting in a group name into the “join group” dialogue in the interface for an open group, or by accepting an invite to an invite-only group. When a group is deleted, all data related to it is deleted or archived as well.

Graphs are the core place where we store social user-generated content: chat messages, social network posts, blog posts, links, and eventually multimedia. Graph store is built to be flexible enough to support many different types of “apps” built on top of it, whether you want to have a forum with some friends, a Pinterest equivalent, a more private version of Facebook, a decentralized Reddit, or an even more distributed version of Mastodon. You can read more about graph-store by viewing the source or reading our API Reference documentation.

The %graph-store may be accessed from foreign ships through the use of the %graph-pull-hook and %graph-push-hook.

Metadata within the broader context of the userspace application suite can best be thought of as a database join between the %group-store and the %graph-store, as it provides bidirectional indices for querying all of the graphs that a group has, or which group a particular graph is associated with.

Contacts are your address book. Individual ships (people) you talk to may have a nickname, a profile picture, or a colored sigil background that helps you identify them in groups, chatrooms, blogs, and collections.

Invites is a simple subsystem that allows you to send all the details of a given resource (e.g. graph or group) to some other ship so that they may join it if they desire to. Invite acceptance is handled with threads that listen to the %invite-store using the %observe-hook and invite sending is handled with the %invite-hook, which allows any ship to send you an invite without any permissions involved.

Hark is a generic notification and unread-tracking subsystem that currently keeps track of all unread functionality for the system. The %hark-graph-hook sends data about %graph-store events to %hark-store.