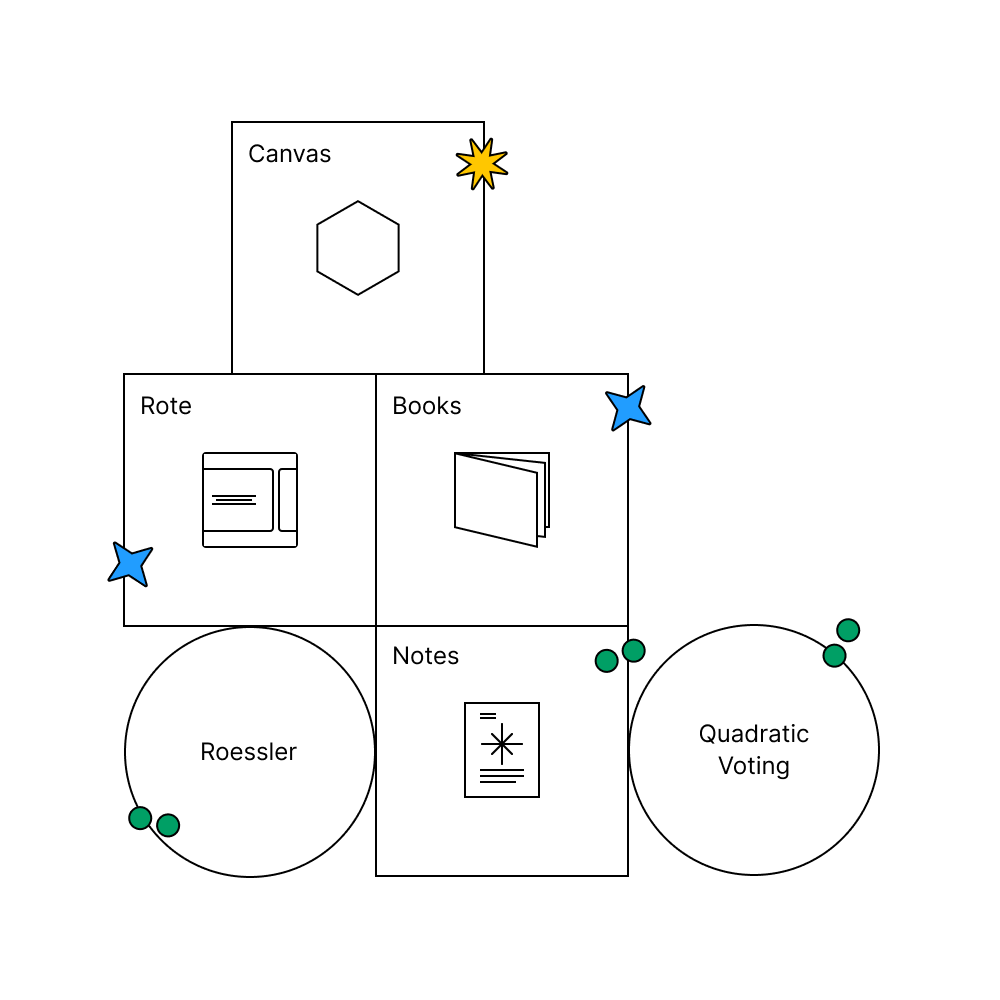 Results of the Urbit Hackathon

We recently held an invite-only Urbit Hackathon for graduates of our Hoon School program, and the submissions really impressed us across the board. Submissions were judged on several criteria: creativity, usefulness, and code quality.

Congratulations to all the participants, especially the winners—their projects are seriously impressive.

Jose’s ~norsyr-torryn Canvas is a peer-to-peer, collaborative drawing app that comes in the form of a Landscape tile. It’s kind of like a multiplayer MS Paint, but better.

Canvas uses Urbit in a way that we think it’s supposed to be used: the stuff that doesn’t require peer-to-peer or storage heavy lifting, such as the actual “drawing” component of the app, is done outside of Urbit.

In addition to a freehand template for the classic Paint experience, you can choose from a number of templates to work with, such as a grid of fillable hexagons, or maps of parts of the world and of continents with fillable country divisions. Have you ever wanted to compare which countries you visited, color-coded for how much you liked them? Canvas has a built-in feature for sharing your work on chats in Landscape.

Check out a video demonstration of Canvas, and view the code.

Luke Champine’s (~watter-parter) flashcard app for Landscape, Rote, has been awarded one of two second-place prizes.

Rote users write decks in udon, review them, and share them with other ships. His immaculate backend code-style and documentation secured his high placement in the Hackathon—his Hoon code also functions as a full-blown walkthrough. If you’re a Gall novice and you’re looking to learn, take a look at his code. Luke also kept a Notebook documenting his experience at ~watter-parter/hackathon.

Luke also included example decks for flashcards on Hoon runes and their irregular forms. So, all said and done, everything about Rote is an excellent resource to the eager Hoon neophyte.

Pyry Kovanen (~dinleb-rambep) was also awarded second prize for his reading-list-sharing app, Books. Also a Landscape tile, and it’s pretty darn useful, with the ability to import books from Goodreads. Check out the code and the video demo.

The Roessler project is full of cool, novel features. You might enjoy taking a look at the GitHub repo ...if your brain is big enough.

John Franklin (~dirwex-dosrev) also secured third place for his Notes application. True to its name, it’s a Landscape tile that allows the user to create and search notes by keyword. Look at the code and the demo video.

Jon (~ribnes-fonbex) was awarded third prize for his Quadratic Voting project. It implements for Urbit ships a quadratic voting system, which is sort of like ranked-choice voting but allows people to express their stronger preferences.

Congratulations to the winners and to everyone who submitted—nice work!

We were thoroughly impressed with all of the projects from this inaugural Hackathon. Not only did this Hackathon demonstrate the talent and dedication of our community members, it’s an encouraging sign about the maturity of the Urbit system. We’re going to hold more Hackathons in the future, with one big change: they will be open to anyone who applies.